Last time I met them I was attending TFD 11 in Boston, it was summer of 2016, and I suddenly had a good impression, the one that makes you believe you’re in front of anything innovative.
After a year I’m going to meet them again in Silicon Valley at Tech Field Day 15, and I’m quite curious on what will they put on the table.

For anybody reading the first time about Actifio, the main product is “Enterprise Data-as-a-Service”.
The so-structured data allow instant access from everywhere for several purposes.

Actually this solution gives the possibility to offer data for Dev, Test and DevOps with the main goal to create higher quality applications, and do it faster.

Other fields of applications are Backup and all that’s around, like Vaulting and DR, so, a stronger resiliency and availability.

Deployment is openwide, cloud (public, private, hybrid) and on-prem. This also helps in case of migration from on-prem environments to the cloud, partially or totally.

Now, what’s different in this solution, according to what Actifio states. Well, as told at the beginning, the instant access to data and anywhere, protection of data inborn, scalability, security, overall.

But the most interesting part for me is to understand which is the workflow to obtain these features. Enterprise DaaS isn’t a siloed data management as traditionally intended, but application and SLA centric.

So, following this schema, the data are captured at block level according to SLA at the base of the application, then a copy (golden) is produced, moved once and stored anywhere, and at the end unlimited copies are forged to be assigned to many purposes, the ones described above.

My expectations are to evaluate a delta in this past year, to see some use cases and to have a guided look to the platform, with a particular focus to disaster recovery.

And I’m again one of the lucky delegates that will join the event.
Everytime it’s exciting, either because of Stephen that set us at the very center of the stage, either for the new people to meet and for the old one to see again.

This time we’ll have 3 new entries:

a very few advices for them, some one asked about dress code – yes, business casual is ok, no shorts but not even suit. A shirt or polo where the mic will clip easy will be great.
Second – the entourage will not leave you a second free, in the best meaning of the sentence, so enjoy all the activity you’ll be involved in.
Last – keep Twitter or other social at a hand: you’ll be in streaming and you could catch any question to ask in behalf of anyone at home, and don’t forget to tweet using the hashtag #TFD15

The edition #15 is distinguished to have a strong networking presence.

…I dont think words are needed;

met in a previous TFD, enabling Data as a Service for a pletora of uses

hybrid-converged software to power and manage old and new SANs

Hyperconvergence server storage, virtualization and HA in a system

It will be a success for sure, as it always was. So, relax and see you very soon!

There are a number of things to think about before bringing a VMware Cloud on AWS SDDC into your business. 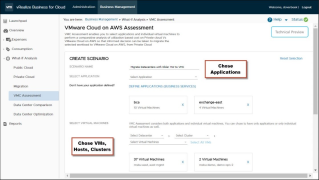 All of these are GREAT questions and for answers to these check out a blog I wrote last week.  But there is a question you need to ask yourself first, “How much VMware Cloud on AWS do I need?”  This blog post will help answer that question for you.

vRealize Business for Cloud 7.3.1 comes with an easy to use VMware Cloud for AWS Assessment tool which can quickly give you the number of hosts you will need, their estimated cost and a simple cost comparison to your current private cloud environment.  Simply connect vRealize for Business to your vCenter and then click on What if Analysis and choose VMC Assessment to get started.

The Cloud Provider Platform is a tested, validated, and highly scalable combination of VMware vSphere® and VMware NSX, along with VMware vCloud Director® and vCloud Usage Meter, that enables providers to rapidly implement VMware clouds wrapped with their own differentiated services. Providers can easily provide self-service multi-tenant compute, network, storage, security and other infrastructure services, as well as valuable ecosystem services through key ISV partners. The result? Providers benefit from clear business outcomes through lower OpEx and faster time to revenue.

vSphere Integrated Containers will have the ability to provision native Docker container hosts. This feature will enable IT administrators to provide developers with an on-demand, ticketless container provisioning mechanism while maintaining strict control over the use of resources in the data center. IT administrators will enjoy the uniform deployment of container hosts and control over resource consumption, while developers will appreciate fast, self-service provisioning.

This latest release will provide administrators with the ability to create a registry whitelist. Created on a per-Virtual Container Host basis, the list will specify the registries a host can access to safeguard developers and make sure they download images from authorized registries only.

The vSphere Integrated Containers registry will have the ability to scan all images for known vulnerabilities. Administrators will also be able to set threshold values that restrict vulnerable images that exceed the threshold from being run. Once an image is uploaded into the registry, it will check the various layers of the image against known vulnerability databases and report issues to the administrator.

vSphere Integrated Containers 1.2 will allow both developers and administrators to enable Content Trust. When enabled by a developer via environment variables, the system confirms that only properly signed and validated images are able to run. Administrators will also have the option of turning on Content Trust on a per-project basis. When on, this feature will allow only trusted images to run in the specified project.

This release will extend the core authentication and authorization capabilities from the registry to the management portal, including:

The new release will feature an updated developer-facing User Interface (UI) by enhancing the integration between the portal and the registry. Constructs such as projects and users will now be common across both components. The authentication and authorization capabilities will also be extended to cover the components.

Updated UI in the H5 Client

The vSphere Client™ (the HTML5 UI used by the VI Administrator) will also be updated. The vSphere Integrated Containers section will feature a list of all Virtual Container Hosts and container VMs in the vSphere deployment.

To support the needs of fast growing teams, vSphere Integrated Containers 1.2 will allow the Virtual Container Host to be reconfigured post deployment.

vSphere Integrated Containers 1.2 will be available for vSphere 6.5 and 6.0, Enterprise Plus edition, beginning September 12, 2017. You will be able to download it from myvmware.com. Please contact your VMware representative if you would like to schedule a technical deep dive session.

For more information about vSphere Integrated Containers, please check out the vSphere product page on the VMware website and follow us on @cloudnativeapps. 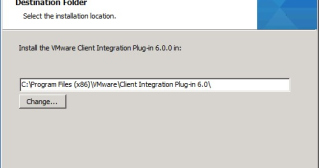 Know Before You Go @ VMworld Europe 2017

This is a repost from the VMworld blog. We look forward to welcoming you to VMworld 2017 Europe, taking place the 11th-14th of September in Barcelona, Spain! Get ready to share four days of innovation with the industry’s top thought leaders, subject-matter experts, and IT professionals. To make the most of your onsite The post Know Before You Go @ VMworld Europe 2017 appeared first on VMware Cloud Provider Blog .

Today I experienced an issue with a Cisco UCS chassis. The error in question was “F0411 Thermal condition on chassis is upper-non-recoverable”. 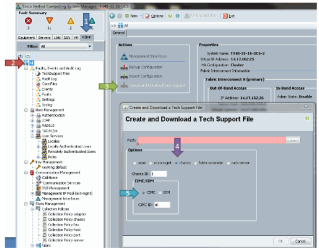 F0411 Thermal condition would make the chassis go red within equipment under the Cisco Unified Computing System Manager, then from there it would go yellow, with the fans stating they were “inoperable” even though they weren’t.  This process continually went back and fourth between yellow and red thousands of times. While the alert was concerning to see, it’s important to note the UCS Chassis itself was functioning normally with no issues.  Concerning to the eye at the very least, and worth investigating. Upon inspection of the device, everything was working normally; however, the fans were running full blast. To resolve the issue I opened a ticket with Cisco TAC. First thing first, I had to upload logs from the chassis. In order to get chassis logs, see the below image from Cisco’s website. 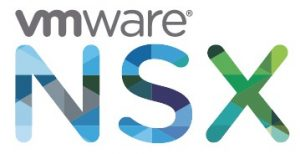 “Agent VIB module not installed” when…